This simple example demonstrates how the TriggerScan™ system can assist in replacing a hammer spring. The instrument is used to examine the characteristics of the springs and also to determine the trigger profile and lock time before and after the spring alternation.

Problem Background: A popular local gunsmith was lightening the trigger pulls on his customers Berettas, CZ 75’s and other handguns by installing aftermarket hammer springs which were slightly softer but longer than the factory originals. He claimed, that the longer and softer spring gives a lighter trigger while still providing enough energy for the firing mechanism, although he did not have any instrumentation to back it up. I obtained one of his aftermarket springs for my CZ 75 and used the TriggerScan™ instrument to document my work.

The hammer spring in this pistol operates within 1.58" (hammer fully cocked) and 1.76" (hammer fully dropped), which provides 0.18" for the spring compression. The following chart obtained with TriggerScan™ compares the original spring (Spring 1) with the aftermarket spring (Spring 2). The instrument examines the springs by compressing each of them from 1.76" to 1.58" in length. Then, for each spring it automatically determines the "Energy Stored" (which equals the area under the curve) and the "Spring Constant" (also called the stiffness). Note that under normal operation the traces start on the left side of the vertical axis, since the datapoints are compensated for deflection of the instrument’s sensor finger under load.

Original spring: Red profile. The spring has a free length of 2.5" and O.D of 0.25". It is made of 33 coils of 0.041" steel wire. The spring exhibits fairly smooth linear characteristics. It stores 3.1 inch*lb of energy and has a stiffness of 21 lb/inch.

New spring: Blue profile. The spring has a free length of 3.3" and O.D of 0.25". It is made of 33 coils of 0.035" steel wire. The spring exhibits linear characteristics. The jerky spots are caused by the spring coils dragging on the guiding rod. The spring stores 2.7 inch*lb of energy, which is 12% less than the original, and has a stiffness of 10 Lb/inch.

Test fire: the pistol was tested with the new spring over a period of several weeks. I liked the lighter trigger pull, which allowed more precise shooting, especially in double action pull. After a while, I had a misfire. Misfires occurred repeatedly every 50 to 100 rounds, with various kinds of ammo.

After this test I decided it was a good idea to reinstall the factory original hammer spring in this gun. 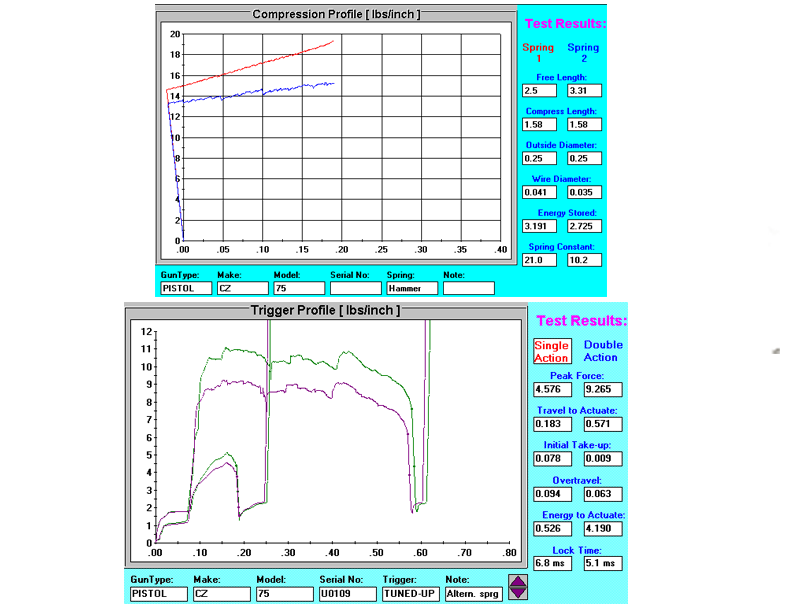